A Cultural New Year’s Bread Tradition – Who Would Get the Coin?

I remember from young always celebrating one of the most inspirational traditions of the Greek Orthodox Church which occurs every January 1. This tradition is the annual family celebration of the Vasilopita in honor of Saint Basil. This original event which occurred in Cappadocia in the last half of the fourth century is celebrated in many Orthodox homes each year.

You may ask yourself, who was Saint Basil? Saint Basil was the first person in human history to establish an orphanage for little children. He also founded the first Christian hospital in the world. His fame as a Holy Man spread like wildfire throughout the 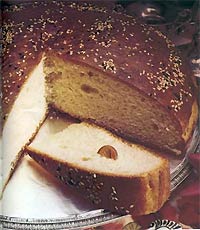 Byzantine world. He was considered one of the most wise and compassionate clergymen in the entire history of the Church. His Feast Day is observed on January 1st, the beginning of the New Year and the Epiphany season. The Church, therefore, in respect for his many contributions to mankind in general, combined the joy and happiness of the New Year with the glory of the birth of Christ, and the Epiphany into what is known in the Orthodox Church as the Vasilopita Observance.

The Greek word “Vasilopita” is directly translated as “Sweet Bread of Basil”. The person who bakes the bread places a coin into the ingredients as it is baking. A sweet flavoring is added to the bread to symbolize the sweetness of joy and life everlasting. It also symbolizes the hope that the New Year will be filled with the sweetness of life, liberty, health, and happiness for all who participate in the Vasilopita Observance.

Once the observance begins, the bread is traditionally cut by the senior member of the family. In this case, that was always my father! Of course, I can remember hearing my mother telling him exactly how to cut it, meaning who got what piece. In other words, there were certain people that pieces were dedicated to and then you would start naming the eldest family member first and work your way down. The youngest, who was me, always got the last piece! I can also remember looking frantically inside of my piece to find the coin when I knew everyone before me had already looked at theirs and couldn’t find it. The excitement would build throughout the process because it was known that the individual who received the piece of pita containing the coin was considered blessed for the new year and would experience wealth and prosperity. To our surprise, there were two occasions where nobody could find the coin! I think the baker would forget to put it in there; that baker would be my mother.

Regardless of only two disappointing times, I can truly say I always look forward to January 1 every year, not only because it’s a new year and new beginnings but because I am always hoping I will be the one who comes up with the coin! At a time when we are saying farewell to 2018 and looking forward to a wonderful 2019, why not try our family tradition of the Vasilopita Bread and see who the lucky one will be in your family. I believe you will love the recipe and the cutting of the Vasilopita. May the new year bring much joy, health and happiness to you and your family! Happy New Year!