We’ve Come So Far, Yet Still Have Far to Go

We’ve Come So Far, Yet Still Have Far to Go 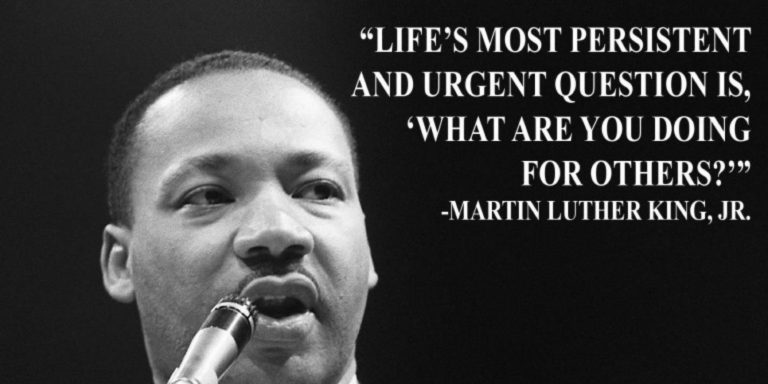 If Dr. Martin Luther King, Jr. were still alive today, what would he say to us? How would he feel? One thing for sure, he would be marching for peace and justice. Yes, I’m thinking he would be satisfied by the educational opportunities being afforded people of all color but also knows more can be done. Surely, Dr. King of all people, would recognize the enormity of our country electing its first African American president for not only one, but two terms and the first African American woman for vice president.  One of King’s most prophetic statements about America is this:

“When our days become dreary with low-hovering clouds of despair, and when our nights become darker than a thousand midnights, let us remember that there is a creative force in this universe, working to pull down the gigantic mountains of evil, a power that is able to make a way out of no way and transform dark yesterdays into bright tomorrows.  Let us realize the arc of the moral universe is long but it bends toward justice.”

As someone born during the 1960s when MLK, Jr. was busy marching and protesting for equal rights, I grew up hearing the stories. They were pretty real to me. After all, it had just happened when I was a baby. My elementary school didn’t have any African American students, but what about kids today? They are not quite as close to this as I was. It’s more than likely that they have always lived in a world where whites and blacks went to school together, ate, worked, and played together. Sure, they have learned about the equal rights movement in school, seen old news clippings on YouTube, and watched movies like “Selma” at the theater. But, do they really know how far we have come? Nowadays, civil rights issues such as the “Black Lives Matter” movement are being presented through the lens of social media, yet many remain confused as to exactly what it all really means.

It has been suggested that today’s students view Dr. King as almost a fictional character. I know that my daughter will forever remember the movie, “My Friend Martin” that was broadcast at her school every year. I, myself, have almost memorized some of the dialogue from years of being a teacher. Not that the movie was in any way bad or misleading. On the contrary, it was a great, fictional representation of what MLK might be like as a youngster today and how the world may be different were. The key word here is ‘fictional’. Students today may need more, something real and tangible to truly experience Dr. King’s legacy. Perhaps as parents, guardians and educators we need to consider this.

OK, so just how do we make history come to life? Here’s a suggestion to consider next MLK, Jr. day or any day of the year…have your children do some service work. Yes, I did say the dreaded word that no student wants to hear on a holiday, “work”. But, if you think about it, just sitting around playing video games and watching Netflix is not going to be of benefit to a child. Really, when it all boils down, Dr. King’s message was about equality, yes, AND service. When addressing a crowd in Montgomery, Alabama in 1957, he stated this ideal, “Life’s most persistent and urgent question is: ‘What are you doing for others?’”

The city of Atlanta, like many metropolitan areas, offers several venues for students and adults to give back to their communities on Martin Luther King Jr.’s birthday or any time of year. In fact, many places call MLK birthday, MLK’s “Day of Service”, emphasizing the idea of fostering social justice through service. It’s definitely something to think about when you are looking for a service project for your family to be involved in.

Due to the pandemic, many service opportunities have moved to a virtual platform.  Click HERE to view MLK event opportunities in the metro Atlanta area.